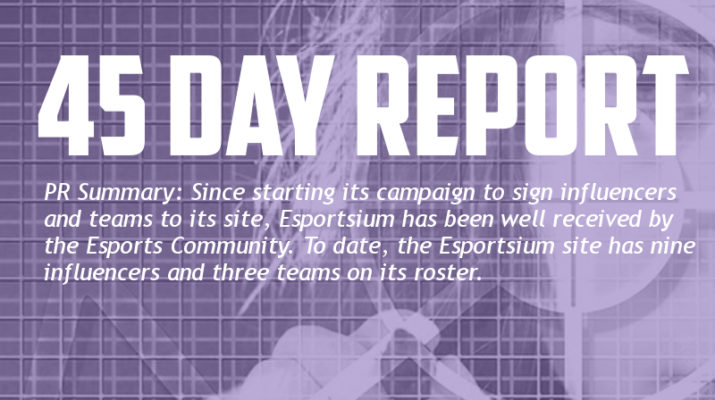 Esportsium was established in 2017 to focus on the Esports Industry. It opened its doors to the public on February 16, 2018. Esportsium is a subsidiary of PurpleGob Marketing founded in 2010. Since being associated with PurpeGob, Esportsium is backed by a combined experience of nearly two decades in marketing, social media, promotion and public relations.

Esportsium Founder, Mark Swanson states, “I’m happy with the growth of the site. Everyone has been helpful in seeing us succeed. There have been instances where potential influencers had contractual agreements that prohibited them from joining our site, however, even then they offered feedback and encouragement. I appreciate how open and willing people are to express their interest in assisting in our growth whether they can help directly or indirectly. They are cheering us on and I’m profoundly moved.”

Esportsium is working with “TheAsianAvenger,” a Hearthstone player, as he is vying to be one of the next Twitch stars. “We have been working with our influencers to build their profile to a point where endorsements will come to them. Even the largest influencers need representation to find deals. Getting them the best arrangement possible is paramount. I enjoy working as a mentor for my influencers and I’m learning a lot from them too,” stated Mark.

Esportsium offers consultation and mentoring to its clients and Influencers. The personnel at Esportsium are capable of handling many different aspects of esports marketing and social media marketing.

The focus is to gain new influencers, esports teams and clients and create awareness. The company is open to working with individuals of any size and budget as well as businesses both large and small. Esportsium has forged trusted relationships with some of the most significant gaming companies in the world and is actively pursuing more. Clients, Influencers and Talent can contact Esportsium on the company website.