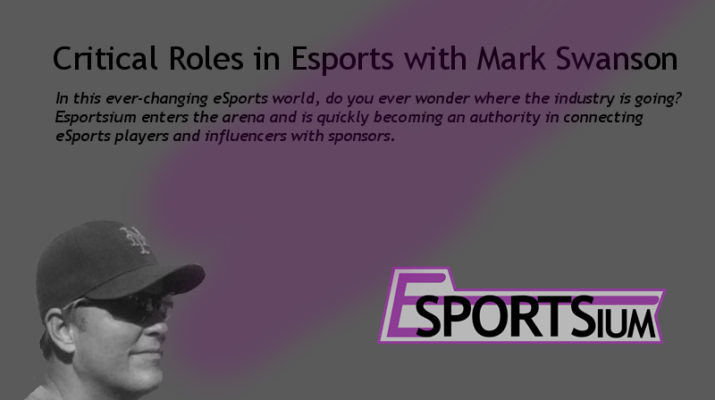 In this ever-changing Esports world, do you ever wonder where the industry is going? Esportsium enters the arena and is quickly becoming an authority in connecting esports players and influencers with sponsors. Founder and owner, Mark Swanson, tells the story.

Q: What is the goal of Esportsium?

A: Esportsium has several goals. The first goal we are pursuing is to build up our image and to become a force within the Esports Industry. Another goal, considering that Esportsium is a socially-driven enterprise where our influencers will promote brands, is to build a good following ourselves.

We are a talent agency that will put our clients in contact with Esports Teams and get them endorsements. The talent that we pursue has followings on Twitch, Twitter, Facebook and Instagram, so we want to be considered social experts. This leads to another goal: helping up and coming influencers and teams with their social media marketing. When we find someone with a lot of potential, we’re looking to build them up and help them get sponsored.

Q: Do you think that esports players are underrepresented or don’t make the most of it when it comes to sponsoring and the media?

A: I think esports sponsors and endorsers don’t get enough out of their players. There are companies that sponsor Esports players but don’t work with them closely enough to build brand loyalty. When sponsoring a player, one must be an active part of promoting and marketing, and I don’t see either side being ambassadors for their brands.

Q: How do the influencers that you feature on your website come into play?

A: The influencers are the voices of our clients. We work closely with them to build up their profiles and offer consultation that will lead to sponsorship. Some of the influencers are great at building content and are excellent promoters. We want to show brands the influencers that have particular value to them. The influencers on the site are a showcase for delivering diverse types of messages. Companies can hire several of them to fill out a campaign for any time period. We ensure that the influencers will give them the results they are looking for.

Q: Where do you see potential for eSports players to draw more attention to them and make extra money?

A: Esports players must be networkers and promoters. They should be joining social media sites and participating in conversations – collaborating with YouTubers in their genre and be social. To start getting on Twitch and religiously streaming is a wonderful way to monetise their brand. However, the fastest way to earn money is to enter tournaments such as Dreamhack, the Overwatch League and the FIFA Interactive World Cup.

Q: What kind of companies or institutions do you think should look at esports to find people who represent their company values and products?

A: Some Esports players have a huge following in a specific demographic. For example, I see companies like Citroën, Ford and Toyota working with Esports players in sponsorship deals. These companies would appeal to the Esports market. About 25% of Esports fans are 18 to 24, and car companies that offer decent and practical cars are an excellent opportunity to endorse Esports players. Imagine a very popular streamer representing a car that his or her audience could afford.

Q: What are the most important features for an esports player to be interesting for companies that offer sponsoring?

A: There are two main factors: You either must be great at the game with good results or have a huge personality. The players who combine both are way ahead of the curve. A third sub-factor is the importance of being good at the most popular games. The greatest player at an unpopular game will not get as much exposure as an average player in a very popular game. However, the same isn’t true for players with personality. The biggest personality can make even the most unwatchable game appealing and popular.

Q: Will esports always be a niche, or can it become a mainstream “sport”? Can esports stars ever get to reach a social status like stars in traditionally popular sports?

A: Yes! It’s rarely affected by climate, and it doesn’t require brick and mortar stadiums. Because Esports games can be played at home, there will always be talented players coming into the game. Dare I say; it is already mainstream with an Esports game scheduled to be part of the Olympics very soon.

Q: Just as with poker, chess or other skill games, there’s always a debate about if these really are sports. What makes a sport a sport?

A: Sports require agility and stamina, with poker and chess you don’t necessarily see it. In games like StarCraft, a player’s dexterity is so prominent. There are so many things going on within the screen and game that only the fastest people – those with the ability to think quickly and use the control the best – are able to succeed. It requires a tremendous amount of stamina to play these games as players are thinking fast for extended periods. I challenge anyone to play an Esports game for 2 hours straight and say it’s not a sport.

Q: What can esports players, companies, event organizers or who else is interested do to find attractive, suitable partners for sponsoring and/or advertising campaigns?

A: They must be good marketers and recognise how to match their company with the right face for their brand. At Esportsium, we are marketers, agents and mentors. We know how to create campaigns with the right talent. In addition to the goals I mentioned earlier, all parties involved in working with Esports players and influencers must be dedicated to the project. If a company invests time in the right people, then they will get the right results. We make sure that companies can use our expertise and connections to their advantage by taking the time to cultivate healthy relationships.