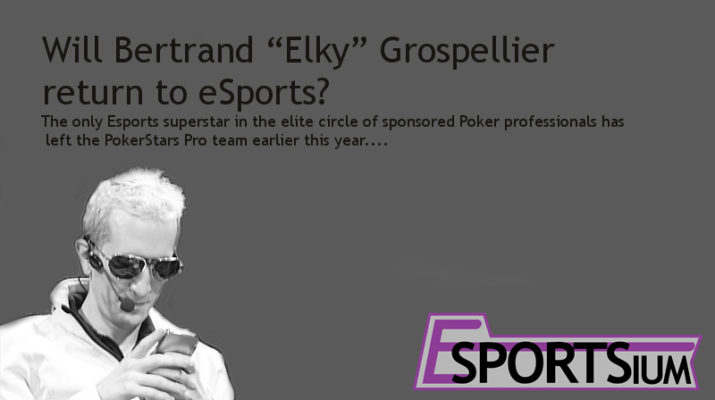 Bertrand “Elky” Grospellier: The only Esports superstar in the elite circle of sponsored Poker professionals has left the PokerStars Pro team earlier this year. He might be motivated by the surge of money now pouring into the video gaming industry.

Bertrand Grospellier, nickname “ElkY”, is the most successful poker star in France and one of the best-known and most popular players in the world. It left the poker community wondering why the market leader in online poker would let such a locomotive of poker go, but the reasons might be personal priorities on Elky’s part.

While there have always been world champions and highly successful players in the PokerStars roster – despite them now focusing on celebrity status more than on poker prowess – Grospellier was special in that he was the only sponsored player anywhere with a background in Esports.

Before starting to play poker, Grospellier was already making a living as a professional “Starcraft” player. In fact, as a young man, he relocated to South Korea to play there, as this was where the action happened. Grospellier was literally the only European competing in a game completely dominated by Asian players and being able to hold his own.

It was his will to success and perseverance that made him an interesting player to sign for PokerStars, apart from his talent, of course. His experience with incomplete information games helped his poker career massively and saw him skyrocket to the top of the world. He brought a hyper-aggressive style combined with extraordinary math skills to the game that was pretty much unheard of. Unforgettable his blind all-in at the final table of the PCA in the Bahamas after a raise and a call. Grospellier’s move forced both his opponents to fold simply because of the pay jumps, and he went on to win the event.

Grospellier is also one of a small group of players who have won a live Triple Crown, meaning they won an EPT, a WPT, and a WSOP event. But life goes on and priorities change, and they might well have for Bertrand Grospellier.

In an interview with British GQ, the French man spoke about the similarities of poker and Esports:

Poker and the game I was playing, StarCraft, are both … very competitive. You don’t see everything, you don’t see what your opponent is doing – it’s like fog of war. Most of the time you have an idea, but you never know where he is or what he has. There are lots of similarities, that’s why lots of players have made the transition from Esports to poker.

The Esports industry has become bigger now, but poker has always been huge.

Asked what he would do if it wasn’t for poker, Elky answered:

I would probably still be in my previous career as a video gamer.

This interview was taken in September of last year, a good three months before Grospellier parted with PokerStars. He’s now very involved with the King’s Casino, and he’s gone at least partially back to Esports by joining Team Liquid and playing Hearthstone: Heroes of Warcraft. This step he already made late in 2015, and it marked the beginning of a return to his roots.

Also, he’s not the only PS team pro to go in that direction. Cash game expert Randy Lew is also a part of Team Liquid, and Brazilian spearhead of poker André Akkari is working with his own Esports Training School.

Grospellier has also focused much more on streaming poker on Twitch compared to his former live career, and he’s naturally become one of the most prolific streamers in the industry. And then there’s this tweet that Elky pinned to the top of his feed. It says: I am now content and eager to start a new and very exciting challenge … more info soon