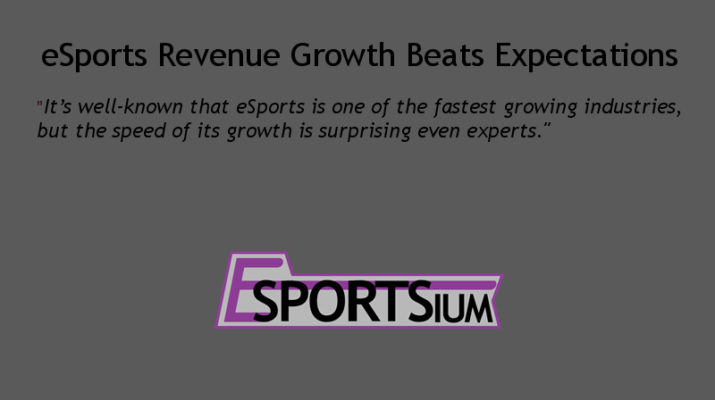 It’s well-known that eSports is one of the fastest growing industries, but the speed of its growth is surprising even experts.

“Growth” might not even be a strong enough word anymore for what’s happening to the eSports industry – it’s almost exploding.

Instead, the revenue has already crossed the $1.5bn mark in 2017 – equalling 66% growth over just 12 months – and the industry shows no signs of slowing down.
Of course, it can’t go on like this forever, the number of players on planet Earth is limited, but eSports won’t stop growing. Experts now assume that the rate of growth is slowing down over the next few years, but that the revenue will still go up to $2.3bn by 2022.

Dota 2 and League of Legends are currently two of the most popular games, with LoL having a much larger player base than Dota2. However, the funds going into Dota2 have resulted in overall prize pools in 2017 of over $37 million – a number that dwarfs even some of the largest poker tournament prize pools.

Let’s not forget that poker went through an incredible hype during the 2000s when the number of players in the WSOP main event went from under 200 to over 8,500! It’s not too far-fetched to expect something like that to happen in one or the other eSports game.

Where does the growth come from?

Although still widely ignored by mainstream media and companies, sponsorships, advertising, and external investments have been going up significantly. Together, they account for 85% of the total eSports revenue.

Further monetization, particularly when it comes to Dota 2, has been achieved by the sale of in-game add-ons.

While the revenue grew by 66%, the number of viewers only went up by 12%, showing that the value of eSports is increasing fast. Most of the investing companies are companies that are active in the same industry, which means that the vast majority are not, and most of them probably have no idea what eSports even are.

By now, there are over 300 million active and passive users of eSports worldwide, and the growth rate has been at least steady.

Thus, the potential of sponsoring in eSports is apparently huge. What the industry needs now to flourish is better connections between the players, the sponsoring parties and, last not least, a larger audience, and Esportsium will be part of that process.

Read about Esportsium on PR.com