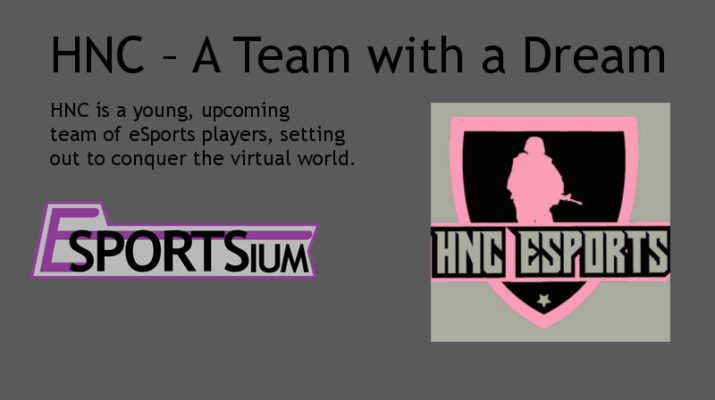 HNC is a young, upcoming team of eSports players, setting out to conquer the virtual world. That and nothing less is the goal of the team. However, there’s no time limit, and fun is the most important thing anyway, so come along for the ride.

This sounds like an interesting experiment. In a highly competitive world like the one of Esports, a group of young players wants to rise to the top with a “family first” attitude. Just look at their post on Reddit in February 2018, where they’re asking people to join the team and play for fun, and when they’re asked what level they play, the answer is “I don’t know”.

Just shows you how you can take seriously, but not too much. Yes, eSports has become big enough to grant top players a living, but hey, at the end of the day, we’re just playing games, ok?

Make no mistake, though, HNC is there to rise to the top. They’ve organised their communication channels like Facebook, Twitter, Reddit, and Twitch from the start, instead of playing for some years and then thinking of it. They’ve devised a plan from the outset, and Esportsium will be one of the supporting forces for their career.

At the core of HNC, there are three players – Aleks, Flash, and Rocket – and we spoke with the team leader Aleks, who’s also known as Katelynn in the non-virtual world.

Aleks: Five Adjectives that describe HNC are, dedicated, proud, noisy, friendly and energetic. If you ask people what describes us, I feel those are the words to come up.

E: What is it that sets you apart from others in the Esports industry?

A: What sets us apart from other teams in the eSports industry is that we’re driven to be the best that we can be. We’re driven by the prospects of this becoming our future job and we’re driven by helping each other become better competitors and people than we were yesterday. Our friendships within the team are what make this a truly awe-inspiring adventure.

E: Who are the main people and titles of the people involved in the project?

A: The main people in HNC and titles are me – Aleks – Flash, and Rocket. I was the person to start HNC and put everyone together, and I put in many hours of work to make this the best team that it can be.

Flash and Rocket, are the co-leaders that help me out when it’s busy or I need extra help doing things. Each person in HNC is just as important as the ones who run it, without the ones who are out working or editing our stuff there would be no HNC and we wouldn’t have all these great memories to go off of. Our streamers, editors, leaders, and competitors are the ones who truly build up HNC to be the best thing that it possibly can.

E: What is the primary message you want to convey to the public?

A: The main message we give to the public is that “Family First, Team Second”. Everything’s fun and all, but we build friendships with everyone on the team, and without all these friendships there wouldn’t be all the jokes and laughter that happen every time we talk. Whether it is on streams or if it’s during our weekly meetings, we’re always having a good time.

We put a lot of emphasis on being a family before we’re a team, there has to be a bond amongst everyone before hours are spent talking and working. My day to day role in HNC is to ensure everything’s getting done and to talk to the co-leaders. Creating a game plan each week of what needs to be done and what’s going to be released that week.

We started from the bottom and working our way to the top, so be on the watch for us.
——————————————
At Esportsium, we like the way HNC are looking at things, and we’re going to help them grow. If you feel the same and you even like the idea of being on the team, you can contact us using the Esportsium Contact Form or send a direct message to the @Esportsium Twitter account.

If you have or know a company that would like to support this family-style, fledgling group of eSports players, please do not hesitate to contact us.