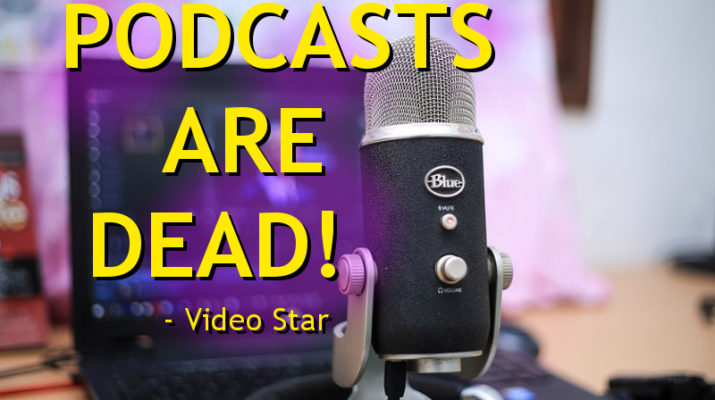 In a day and age where everything seems to be visual, some would expect the death of podcasts to already be happening. The methods for creating podcasts has become more straightforward and everyday podcasts are sounding better. In the past five years, the audience for podcasts have grown and listeners have become younger.

Podcasting is not dead, it’s thriving.

How Popular are Podcasts?

I started working with a few people that produce weekly podcasts and I thought at first that it was outdated. Creating a good podcast is difficult and time-consuming. Why not do a YouTube channel instead? I strive to learn how to produce quality products and services, so I can help others. Thus, began my journey into researching podcasts which led me to some interesting statistics.

According to Edison Research, a USA-based study in 2017 showed 27% of listeners were aged 12-24, up from 11% in 2013 and 31% of podcast consumers are ages 25 – 54 almost double the amount of listening in 2013. Still, I wondered why podcasts have been growing and why are they popular with younger people. I had visions of 60-year-olds reading from Kindles and bragging about their latest monochrome PDA listening to an AM radio show.

I contacted a friend’s son on Facebook, he’s 20 years old, and asked if he listened to any podcasts, he quickly replied: “at least once a week and I know a few friends that listen to some too.” Recently, I was at the shopping mall and observed young people with earbuds and thought that about 1 in 3 were listening to podcasts. This might explain why you might see a group of twenty-somethings standing around together intently listening to something, seemingly undistracted by each other.

It occurred to me that in order to read an article or watch a video, you had to take your eyes off what you were doing. It’s hard to walk and chew gum for some and way more difficult to watch a video or read an article on the go. More automobiles have USB ports installed in the dashboard and podcast listeners can download their favourite shows and play them in their cars or on their phones. The last thing we want to see is people reading articles or watching videos on YouTube while driving. The podcast is a safer alternative.

Car radios are connected to mobile phones in a snap and make listening more accessible. The listener doesn’t have to have their eyes glued to a screen, they don’t have to scroll through articles, the listener can listen without interference and is connected. There is an essence of maximizing one’s time, one can listen to a podcast while completing other tasks, it’s multitasking at its best.

What are they listening to?

People listen to sports and esports news, fiction, self-help and just about anything. People listen to news and commentary about their favourite games. They’re tuned in to improve the way they play a game or simply to have a laugh along with the guests and hosts. The main reason I started looking into podcasts was that I began working with a popular Hearthstone Podcast created by one of the Esportsium influencers Andrew Brown from The Happy Hearthstone. He’s been podding for more than 3 years.

In the last five years, podcast popularity has just about doubled. This is good news for marketers as well as the fact that podcasts have almost an equal distribution rate by gender with 56% of the audience being male. In addition to this, 42% of podcast consumers listen to the entire episode and 44% claiming to listen to most of the show. Podcast hosts also have a very loyal following and their fans are influenced by their opinions. Podcasters are often seen as being an authority in their field and 61% of the audience has stated they have made a purchase resulting from an ad they’ve heard during a podcast episode. Podcast listeners are loyal and dedicated and most listen to the episode within 24 hours of it being published.

Podcasts are not Dead They’re Thriving

Admittedly, I’m fascinated by the statistics on podcasts and their popularity. The thing that impressed me the most was the demographics age. I had no idea that the audience was growing. One of the things that it reminded me to do is “never assume” and always be open-minded to things that you thought were unpopular or antiquated. Opportunities for marketing and endorsements abound in the use of influencers who have podcasts.

As I’m concluding this article, I can’t help but think I’m glad I looked into the numbers. The main takeaways for me are why do people listen to podcasts? It is because they are easily accessible, easy to find, don’t require one to focus solely on them and allow listeners to maximize their time. In today’s internet world and perhaps the world itself, there are people not willing to read an article and would rather listen to a podcast. You may have 15 seconds to keep a reader’s attention and get a whole hour of a listener’s time.

How does that sound? Thanks for listening.