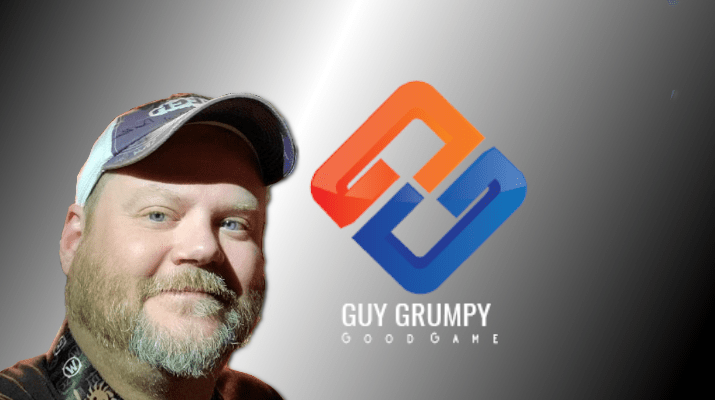 As part of the Esportsium Streamer Spotlight Series, we had the pleasure of catching up with GuyGrumpy during the release of the latest Hearthstone expansion. The new meta, Descent of Dragons, was released on December 10, 2019. We’re thankful to him for taking the time to answer a few questions.

GuyGrumpy can be found on:

GuyGrumpy: I am a 45-year old Hearthstone streamer from the Pacific Northwest (US). I’ve been playing Hearthstone since general release, dabbling in all modes as they become available, and maintaining a complete playset, and I began streaming in earnest in February 2019. In addition to Hearthstone, I enjoy technology gadgets, boardgames, backpacking, and spending time with my girlfriend and her daughter.

What platform do you stream on and why?

I stream on Twitch. When I first started streaming in February, I multicast to multiple platforms (Twitch, Mixer, YouNow, and Periscope), but found that the achievement system in Twitch made it easier to set short-term goals, which is something I needed to help build consistency. Also, the affiliate program was very attractive, especially compared to other platforms, as even a small monetization helps with motivation.

How did you get into gaming?

I can’t remember not being around games. We played a lot of board games when I was a kid, but my first console was the family Atari 2600. It was always fun to challenge my dad for high scores, or even just watch him as he ran up crazy scores in Kaboom. In college, I ran the computer labs, and set up a lot of the after-hours LAN parties. After graduation, I got into competitive Magic: the Gathering, and continued to play a variety of games as my biggest hobby. The transition to my current games feels like it was always the direction I was supposed to go.

Do you have a gaming idol, someone in Esports or gaming that you look up to?

There are quite a few that I look up to. The one who probably had the most impact was Day[9]. When I was starting to get into Starcraft 2, I found his Day[9] dailies very educational, and would watch most every night. The strategies I learned there helped me finally beat my brother-in-law and actually rank up to silver. He’s also the first streamer I watched who played Hearthstone, and his excitement was contagious. He also approached the streaming platform as a way to educate and share his love of games, and I think that’s a great inspiration.

What is the best part about streaming?

Easily the community. The people that you meet become good friends, and you get invested in their successes and failures, in and outside of the games we play.

“Much love” is my mantra. I use it on stream all the time, and it’s much like the Hawaiian term “aloha” – I use it as a greeting, as a goodbye, and as a thank you. My favorite quote is probably from one of the Day[9] dailies where he talks about his journey, and says something like “There is nothing more cool than being proud of the things you love.” We all have these things that we love, and sharing them in a way that makes others love them is one of the greatest feelings.

What image, picture, quote, idea or song gets you ready to compete?

I like dancy, pop music as a way to get my blood flowing. To get me ready to compete, though, it probably doesn’t get better for me than “Let’s Go” by Calvin Harris.

How does being a streamer inspire you to do good?

I’ve always been relatively introverted, but the ease of talking to new people who are constantly in and out of chat has made it easier to talk to strangers in real life, which puts you in more situations where you can do good – even if its just listening to problems and empathizing with them.

I’ve also had a few chances to participate in charity streams through my team – I was part of a charity stream through the month of September that raised over $500 for Feeding America (which I matched, to give a donation of just over $1100). The team has recently partnered with Softgiving, so I’ll be running some charity streams in December for ToyBox, and early next year for my girlfriend’s nonprofit, NorthWest Kidney Kids.

How does streaming and/or gaming make you a better student or worker?

It probably doesn’t, overall… It is very easy to get distracted, thinking about what you want to do on stream next. But there are some positives, too – it’s definitely helped me get better with small talk and helped me improve my presentations by setting me up with better production equipment (especially lighting and microphone).

What’s your personal goal in streaming and gaming? What’s your biggest achievement so far?

When I started streaming, my goal was just to reach affiliate, just to prove that I could do it. I was able to do that in 2 months, and I think that is my biggest streaming accomplishment so far. Now I’m working toward growing to partner, at which point I hope to see if it’s something that I could do for a living.

In gaming, I have a bunch of goals that I set each year… I’m now working at trying to get to Legend in Hearthstone for the first time, and I’ve been just a couple wins away a few times now, so that feels like it’s just a matter of time. My biggest accomplishment in Hearthstone has been claiming the top seed in our local Hearthstone League final tournament this year, to take place in early January.

One goal that combines both streaming and gaming is to run a special stream for when my dust button hits one million dust. When I first started watching Kripparian, he explained the value of saving dust on your button to maximize dust value when cards get nerfed (because you get a full refund of the dust).

I’ve modeled my dust hoarding after him, and have now started to be known as the guy with the big dust button (it sitting around 788k now). I’m hopeful that I’ll hit the one million mark sometime next year.

Who inspires you? Have you ever met them in person? If not, who is it?

I take inspiration from many, many sources. In Hearthstone and streaming, Alkali Layke has been my biggest inspiration. She was giving a talk about starting up on Twitch at a local convention right at the time I got started, and noticed my Hearthstone hat. That sparked some additional conversations and we became fast friends. She’s so supportive and is transparent about her journey as a Hearthstone streamer. She’s always encouraging and willing to help. I’ve since had several opportunities to hang out with her at TwitchCon and BlizzCon, and she’s just as welcoming in person.

What game(s) are you streaming? Please give us a quick rundown of the game(s) and tell us why this is the game(s) you’re streaming.

I’m primarily a Hearthstone streamer. I’ve dabbled in a few others (MLB: The Show, Borderlands 3, and Legends of Runeterra), but I keep coming back to Hearthstone. I think that it lends itself the best to streaming – there’s a fair amount of down time to keep up with chat, and the client works well on dual-screen setups (doesn’t minimize or anything). I also used to be a competitive Magic: the Gathering player, and this has some of that feel, but much more streamlined and lighthearted. That, plus my previous addiction to World of Warcraft, makes Hearthstone a very appealing game to me.

Be sure to connect with GuyGrumpy on social media.

Do you want an interview with Esportsium and be part of the Streamer Spotlight Series? Please contact us using the contact form and we’ll be happy to give you more details.