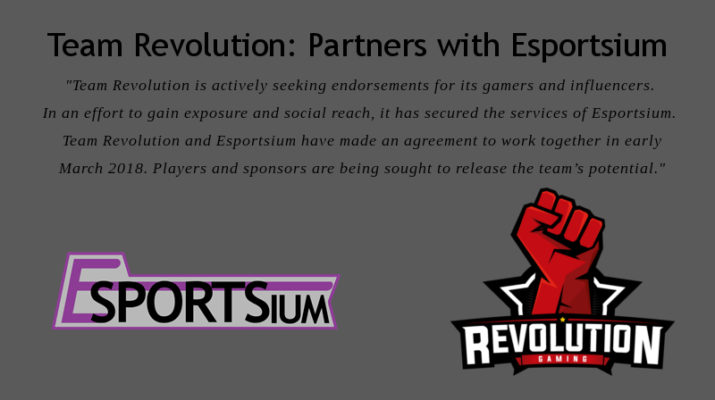 Team Revolution is actively seeking endorsements for its gamers and influencers. In an effort to gain exposure and social reach, it has secured the services of Esportsium. Team Revolution and Esportsium have made an agreement to work together in early March 2018. Players and sponsors are being sought to release the team’s potential.

Rezwan “Jehuty” Mostofa, Team Revolution CEO/Director stated, “We focus on players that have a hidden potential and may not be as well celebrated as other pro-gamers. We help provide players with the platform and tools to unlock their potential and strive towards success.”

Team Revolution has tenacious management that is determined to help their team members stay motivated during times where the pressure is greatest. It is this resolve that is ingrained in the company culture. Rezwan Mostafa elaborated more about the company’s determination, “In our first year, many people just wrote us off as another Esports organisation, however, we want to interject that fact as we are pioneering Esports in the direction it was meant to be and this is by creating ladders for the grassroots players to climb to highest pedestal of competitive gaming.”

Upon visiting the Team Revolution website, visitors are greeted with several teams for esports games like StarCraft and PlayerUnknown’s Battlegrounds. The company is continually adding pro-gamers to its teams as well as cultivating young talent and developing special bonds with its roster.

Since officially launching in February, Esportsium has added new influencers, esports teams and clients to the roster. The company works with gamers of any size and budget as well as companies, both large and small. Plans are to release more information about teams, gamers, influencers and clients who will be accompanying Esportsium on its journey in the Esports Industry.

Esportsium plans to help Team Revolution be the cornerstone of Esports by growing on social media sites like Twitch and Instagram. By the end of March 2018, Esportsium will have a combined social media reach of over 250,000 followers through its influencers, teams and gamers.

“Team Revolution exemplifies that hard work does pay off. They have great staff and players over there that not only play games very well, but they do social media and promotions well. You can’t help but notice them on Twitch or at an esports event. Since they joined forces with us, we’re going to help them step up their game and get them some well-deserved endorsements,” stated Mark Swanson.

The current agreement allows Esportsium and Team Revolution the ability to work with other clients and agencies. The relationship is set up under a non-exclusive agreement. The idea of the agreement is to conduct business together without decreasing the number of opportunities for all parties involved.

Mark Swanson declared, “I pride myself on being transparent, and I look forward to building up a good rapport with all of the people I deal with. We have a lot of cool prospects on the horizon.”

Clients, Influencers and Talent can contact Esportsium and Team Revolution (revolution.gg) on the company websites.