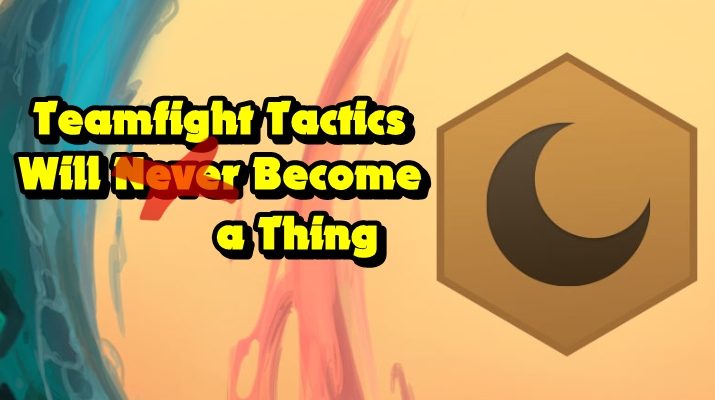 The argument for and against Teamfight Tactics becoming an esports exhibition. Does it have what it takes to be the next big esports craze? Or is destined for something else. Does it matter?

Teamfight Tactics is an auto-battler developed by Riot Games. It has been one of the most popular games since its launch in June 2019. Let’s see if the title has what it takes to become one of the best competitive titles.

Argument 1: Not Ready for Esports

Teamfight Tactics was designed by Riot as a rival to Valve’s Dota Auto Chess. Before being considered an esports title, it’s fair to say that the title still has a long way to go. The mechanics of the game have to change.

The losing streaks are the worst since the damage taken after just one round is too high and quite frustrating. The gold granted to the player is super insufficient. Compared to other games of the genre, the damage in Teamfight Tactics is so insane. In late stages, if after starting with 100 health and after losing one round your health can quickly drop to 50. Therefore, the game could end in two rounds, which is not the best element for a competitive esports title.

When asked about their thoughts on Teamfight Tactics, @BreadSt91706805 stated, “Modern software development is based around delivering a product for consumption as soon as possible. I don’t think it is reasonable to expect Riot, a company which is in competition with other companies to wait until they have a polished game to market. Gamers want games as soon as possible and companies have to compete. We invariably have to accept the shortcomings of this system to have games as soon as possible for esports and regular play.”

No Skill all Luck to Win Games

The payoffs in the game are terrible since their so not much difference in the levels gained, and the gold granted is not enough to get you the champions that you need. The game always demands aggressive play which might not be such a bad thing for some players. Riot Games needs to find balance.

RNG – The Beast Within

Teamfight Tactics heavily relies on RNG (random number generator). After playing hundreds of games, numerous players on Riot’s forums have complained that the “drop item drop system” in the game is quite upsetting. Some might believe that the random drop rate is fair since every player has the same items. They also argue it’s no fun. It’s no argument that the game relies tremendously on the items in the later stage of the game. Some players believe the team compositions don’t matter at all if you don’t have the items.

For a game to be a successful eSports title, the first thing it should have is an audience. The above arguments might prove worthless against the impressive numbers generated by the auto-battler. With over 1.8 billion hours of playing time for the game, it shows that no matter how bad the mechanics are, players still enjoy the game. Since its launch in 2019, an average of 33 million players enjoy the game each month.

“I think Teamfight Tactics is a great way to showcase esports players. The idea of 8 players competing in matches that last 25 to 40 minutes is great. You could have hundreds of players competing in a short amount of time. The ability for them to promote their team and learn about each player is huge” stated Twitch Streamer, VengaDragon

Time of Game is a Plus

Dota Auto Chess games run for about 50 minutes. Meanwhile, Teamfight has 35 minutes of play at most. Shorter games are a good thing for the genre. Having less lengthy games will increase the number of matches and the action. The viewers get to see more of their favorite players compete.

Catching the eye of the public

The entertainment platform Fandom is holding tournaments every week of December 2019 for Teamfight Tactics. The prize pool is $2,000 (£1,500) of each competition. Investment and the prize pools show us how much the game is catching the eye of the esports industry. It won’t be surprising to see if we witness the announcement of a Grand Slam Tournament in 2020.

Regardless of all these talks of bad mechanics, the developers are pushing in updates almost every week. Riot Games has acknowledged the problems mentioned above to the title and said that they’re working on a solution. The game is still in Beta and seeing it reel in so much attention, popularity, and investments in tournaments support that it will make its way to esports.

Teamfight tactics ready for esports, Yes or No?

Which side of the argument you think is the right one? Do let us know in the comments.

Would you like to be quoted in our next article?